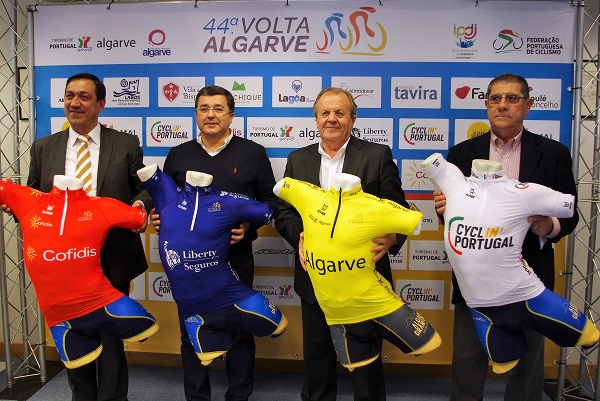 The 44th edition of the Volta ao Algarve, which will be held from 14 to 18 February 2018, was presented today in Faro. The Portuguese Cycling Federation, organizer of the race, wants to cement the Volta ao Algarve as one of the best Portuguese sporting events and wants to show the Algarve as one of the best places in world for cycling all over the year.

The 2018 edition of the race will have five stages and a total of 773,5 km, maintaining the philosophy that have guaranteed success: two stages for sprinters, two uphill arrivals and one individual time trial.

The teams will be presented to the public on the morning of February 14, in Albufeira, where they will start the first stage, heading for Lagos. The course will be 192.6 kilometers, essentially flat, with the race expected to end with a spectacular fight between sprinters.

The first selection of candidates is scheduled for February 15, during the second stage, linking Sagres to the top of Fóia, along 187.9 kilometers, with the finish line to coincide with a first category climb. The highest point of the Algarve will be reached by the longest ascent to the Fóia, a 15.2 kilometers climb with 5,1 percent of average gradient. The most demanding phase will be about 7 kilometers from the end, with about one kilometer in which the ramps are around 10 percent.

Lagoa will be the epicenter of the action in the third stage, on the February 16t, hosting the stat and the arrival of the individual time trial of 20.3 kilometers. The race is longer, more technical and more demanding than in recent years. It’s a pure time trial for specialists which may dictate more voluminous differences, allowing time trialists to correct the losses of the day before.

The longest stage is the fourth, scheduled for February 17. The peloton will leave from Almodôvar to reach Tavira, after traveling 199.2 kilometers. It is expected a journey of truce in the fight for the yellow jersey, but it will certainly be an exciting day and the sprinters have the mission to bring to the attention the numerous public expected in the city of Gilão.

The fifth stage, on Sunday, February 18, marks the return of Faro to the itinerary of the competition. The race convoy will leave the capital of the district to travel 173.5 kilometers to the top of Malhão, in the municipality of Loulé, where the finish line coincides with a second category climb. As usual, there will be a first pass through Malhão, offering to the enthusiastic fans the opportunity to see the riders not only at the end of the race but also 40 kilometers from the end of the Volta ao Algarve.

The balanced and appealing route, the quality of the region's roads, the mild climate in the middle of winter and the excellent hotel offerings have seduced the best teams and the best cyclists of the international peloton along the years. In 2017, the Volta ao Algarve attracted 12 WorldTour teams, being the 2.HC race in the World with more first division teams.

The 2018 peloton will have 25 teams and 175 cyclists, the maximum that the regulations allow. Twenty teams have been confirmed so far, nine of them from WorldTour. It is worth mentioning the return of the BMC Racing Team, which has not visited the Algarve since 2012, and the debut of Team Sunweb and UAE Team Emirates.

The five teams that will close the peloton will be selected from among the 17 formations with which contacts take place.

The Volta ao Algarve will have live television broadcast for the second year in a row. The race will be broadcasted by Eurosport to more than 50 countries. In Portugal the race also can be seen on TVI24.