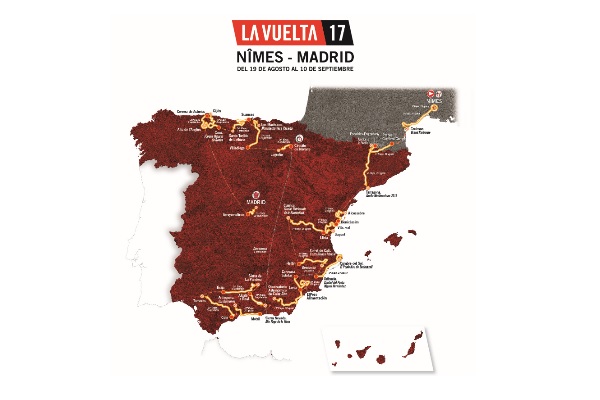 On Thursday, the 12th of January, Unipublic announced the itinerary of the 2017 Vuelta that will commence on the 19th of August with a team time trial in the French city of Nîmes. For the third time in its more than 80 years of history, the Spanish tour will start from a city outside its borders, after Lisbon in 1997 and Assen in 2009.

The Director of La Vuelta, Javier Guillén, pointed out that this decision aims to show the “numerous ties that bind” the French and Spanish communities. “Its love of all things Spanish, its character and its passion for the art of bullfighting and flamenco will take centre stage in this perfect fusion between the Vuelta, France and emblematic Spain”.

Nîmes, the capital of the Gard region in the South of France, is known as “Little Rome” due to the presence of elements from the Roman Empire in its architecture and culture. The city’s history says that in the year 31BC, Augustus conquered the Roman Empire following his triumph over Marc Anthony and Cleopatra and then rewarded his troops with the city of Nîmes.

La Vuelta will kick off with two stages that will take place entirely on French soil, before arriving in another country that has become a recurring feature in the Spanish tour over the past few years: Andorra. The fourth stage of the 2017 edition will finish in Spain, more specifically in Tarragona, where it will then depart from the Autonomous Community of Valencia, Murcia, Andalusia, Navarra, La Rioja, Castilla y León, Cantabria and Asturias, before its usual finale in Madrid.

Yet again, La Vuelta opts for departures and finales that are unprecedented in the history of the Spanish tour. In this edition, the riders will participate in a total of 14 departures that have not been previously seen in the race’s 71 previous editions, as well as in eight finales that are unknown to the grand tour cyclists.

Add to this a classic peak in the past few years of La Vuelta, the Alto de l’Angliru, which will be more decisive than ever. The Asturian mountain pass will be the last climb of this year’s edition and will close the race’s second-last stage, just before the arrival in Madrid where the winner of the 2017 Vuelta will be crowned.