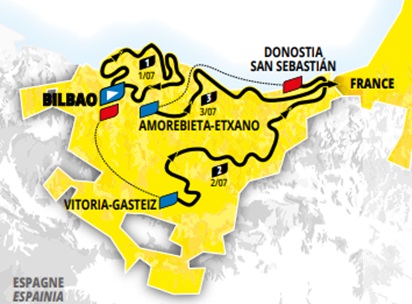 The Tour de France will be visiting Bilbao for the very first time. However, the Basque Country’s largest city is nonetheless the epicentre of its rich cycling history, whose talents have contributed to the reputation of the Spanish contingent in the pack. Indeed, Bilbao has featured on the programme of 35 editions of La Vuelta, with an uninterrupted run between 1955 and 1978, since the country’s leading race was organised by the El Correo Español del Pueblo Vasco newspaper, which was based in the city. In the 21st century, only Basque rider Igor Anton in 2011 and Philippe Gilbert in 2019 have enjoyed the privilege of tasting victory on a Vuelta stage finishing line in Bilbao. In 2023, the first Yellow Jersey of the 110th Tour de France will be awarded on completion of a loop, with Bilbao as the start and finish, which will not leave the province of Biscay and which in particular will visit the village of Guernica. Its recipient will need to boast the qualities of a puncher in order to withstand the energy sapping programme and overcome his rivals on a finishing line at the top of a 5% slope.

The pack will spend part of the following day in the province of Álava, commencing with its capital Vitoria-Gasteiz. Here in 1977, the Tour de France bestowed eternal pride upon José Nazabal, who is still at present the only Basque rider to win a stage of the race in his homeland. It is very unlikely that a solo breakaway will be granted the same indulgence as the pack heads to San Sebastián, where Miguel Indurain won on the prologue of the Tour de France 1992. In fact, the scenario for the second stage is much more likely to resemble one on the “Clásica”, which traditionally takes place after the Tour de France. Indeed, it is on the Monte Jaizquíbel that the crucial steps towards victory could take place just before the race reaches the capital of Gipuzkoa.

The 2023 Tour de France’s stay in the Basque Country will end with a stage start in Amorebieta-Etxano in the province of Biscay. The pack will then head towards France on a route that perhaps might be favourable to sprinters’ teams. In any event, they will hold all the cards for controlling the race on a coastal route that will take them on a final passage through San Sebastián. The pack will bid farewell to the Basque Country as they leave the border town of Irun, on the way towards…

The Basque programme for the first three stages in 2023: