Argon 18 launches its latest bicycle model innovation, the Gallium Pro 2018. New, state of the art technology in both 3D modeling and carbon molding bring the 2018 version of the Gallium Pro to the next level.

The Gallium Pro 2018 is a design evolution of the popular, light and comfortable Gallium Pro, which was ridden in the two previous Tour de France editions.

“Our new Gallium Pro 2018 is lighter, stiffer and more precise downhill. Our R&D team succeeded to push the limits and fine-tune the balance of this bike. First two races, first two wins. We cannot ask for better results and are proud to have the Astana Pro Team take to the Tour de France on this new model,” said Gervais Rioux, Founder and CEO, Argon 18.

“I tried the new bike just before the first stage of the Criterium du Dauphine and I immediately I realized, I want to continue on this bike. I really liked the new bike and its characteristics. It is more stiff and still has a very good balance for the downhill. In the same time you feel really comfortable on it and can ride it really good. I am happy with it and I am convinced that this bike is good to reach a strong result here, at the Tour de France. Argon 18 did a very good job on improving the frame they had and right now this is a really nice frame ” Fuglsang said regarding his victorious effort in Criterium du Dauphine. 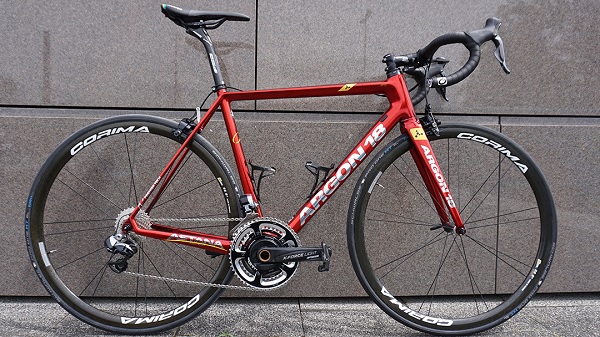 The Gallium Pro 2018 is the company’s lightest frame ever at 794 g for a medium painted frame including hardware, highlighted by refined tube shape design and new a carbon fiber lay-up. Some features of this new model include redesign and optimization of all parts of the frame: from the new 4 point riveted front derailleur hanger right up to the inner cable routing. Another key aspect is greater tire clearance enabling use of up to 28 mm tires.

“For us, the Gallium lineage has always been about the pursuit of the perfect feeling race bike. We are tireless in our approach as we evaluate every small detail that adds to its character, but with each generation of the Gallium Pro we are closer. This one is no exception. This bike is defined by balance- the balance between technology and that intangible feeling of satisfaction you get when you conquer your road. It‘s the perfect balance of performance and bliss moving effortlessly, even rhythmically with the rider,” said Michael McGinn, Director of Product, Argon 18.

Included in the evolution of Gallium Pro 2018 are key details: a new and lighter fork that is both stiff and comfortable, an inlaid chainsuck protector and a refined 27.2 seatpost for more compliance, adjustability and comfort.

“We are more than happy with our collaboration with Argon 18. This year we started our long-term collaboration and both, Astana and Argon 18 have some ambitious goals to be achieved in the future. We worked hard during the first part of the season and now we have the first common product - the all-new Argon 18 Gallium Pro 2018 bike, used by Astana riders at the Tour de France 2017. This is an amazing bike, but the main thing is it was created thanks to a perfect understanding and collaboration between our team and the company. We really like to work with Argon 18 and this work motivates us for something new and larger successes,” said Dmitriy Fofonov, Sports Manager, Astana Pro Team.

The Gallium Pro 2018 models available to consumers include:

For the time trial stages, the Astana Pro Team will ride the Argon 18 E-118 Next.

Over the last 24 months, the Canadian high-end bike manufacturer experienced tremendous growth in every aspect: Record product launches, including the innovative and cutting-edge technologies along with significant expansion of distribution to over 70 countries.